The Solar Farm is located on 460ha of former farming and grazing country adjacent to the Western Power Merredin Terminal and will connect to this facility at 220kV. Risen worked closely with network service provider, Western Power and AEMO through the staged live commissioning process and the solar farm is now exporting 100% capacity output, compatible with Western Power’s grid requirements.

“It has been a pleasure to work with Western Power and their smooth coordination with AEMO has enabled us to reach this milestone of achieving a fully operational solar facility which will supply green power.” said Eric Lee, General Manager of Risen Energy (Australia). 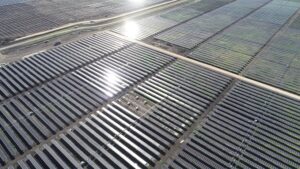 Merredin Solar Farm is one of the fastest builds of a large-scale solar farm seen yet.
Due to the close collaboration between WA’s Monford Group and Risen, mechanical completion of the Merredin Solar Farm was achieved in just 3 months. Risen’s large capacity to resource the project meant that they had all materials and resources on site at one given time, allowing it to be put together quickly and without delay.

Mr Lee added that Risen’s EPCM team has continued this successful approach on future projects with several tier 1 and tier 2 construction companies, signalling that Risen is on track towards achieving their 2GW goal.

Back to NewsNext Article